Working again with the team at FLETCHERWILSON  and their client Live Group. I wrote and directed this film for HealthcareUK to use as part of their publicity package.

Who are Healthcare UK? The film does a good job of explaining  that but what they say is:

“We help UK healthcare providers to do more business overseas.”

Create a commercial for the DTI department HealthcareUK to use internationally to illustrate the best in class healthcare provision the UK has to offer.

Combining live action and graphics to show practitioners at work as well as statistical information about the history, categories and advances of UK healthcare.

The approach I took for this film was a traditional voice of authority adding context and detail to images of action and examples. I wrote the script in consultation with a team of healthcare professionals that contained all of the important and complex information in a straight forward way.

Next I had to define a look and feel for the piece that would work at whilst shooting at pace in a pressured working environment. This was the biggest challenge we had, making the most of the privileged and sensitive access to get great looking footage that would hold it’s own on an international stage.

After some thought and a few discussions amongst the production team I decided it was a great opportunity to shoot with the Arri Amira.

Specifically I wanted to take advantage of the slow motion, quick set up time and PL mount lenses as well as Prores 4444 post production workflow.

Stylistically I wanted to have a fluid, dynamic and steady camera style that would evoke a sense of busy efficiency along with a steady hand. Unfortunately we weren’t able to get a steady-cam so we used a jib arm. 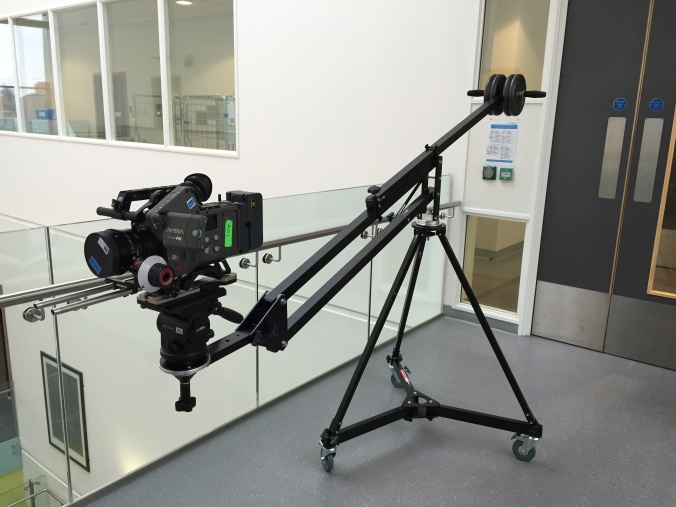 Between FLETCHERWILSON and Shoot Blue we gathered all the kit we needed and off we set for a ten day shoot around the UK.

I spoke to DoP Don McVey  about our process and he had some great insights about the shoot that you might find interesting too.

Joe Rosen: What set up did we shoot on? 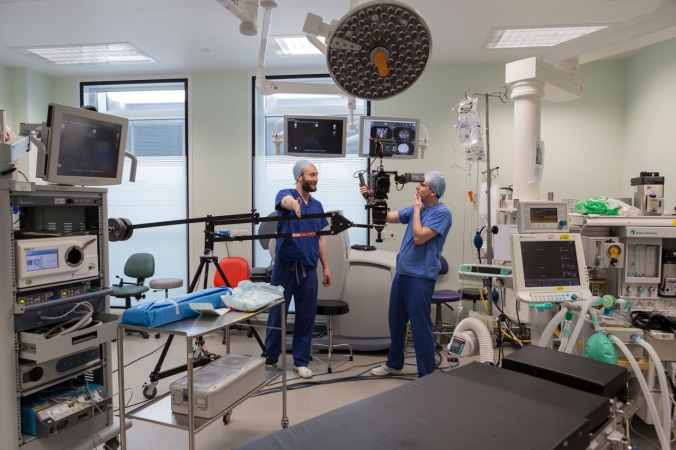 Joe Rosen: What were the benefits of our set up?

Don McVey: The Amira produces a beautifully cinematic image. Shooting in C-Log gives 14 stops of dynamic range which really helps hold highlights when shooting in situations where there is little lighting control.

The Cineo HS is an incredible light, giving a huge amount of punch for such a soft light. The unit is fairly small (with the exception of the ballast). I was able to use the Cineo to replicate daylight coming through windows, while its unique design gave a 180 degree soft light. It was also powerful enough to pull further back, helping to control falloff and give even exposure.

Joe Rosen: What were the shortfalls of this set up?

Don McVey: While the Amira is a fantastic camera, it’s not small – or light! There were times when I wished I had a C300 in my hands, especially when moving around and cramming into small spaces. This was quickly forgotten though, when I saw the images produced by the Amira.

Shooting on cine primes is a great discipline, which often produce a much richer image. But in some of the more challenging locations, where time was a factor, a zoom would have come in very handy!

Joe Rosen: What are the considerations for shooting in sensitive locations such as hospitals, operating theatres, and research facilities?

Don McVey: We really had to keep in mind that the ‘locations’ were actual hospital wards where sick people were being treated. Space was often limited and we were surrounded by equipment worth hundreds of thousands of pounds. Extra care had to be taken in general to ensure that we moved around with care and consideration.

Joe Rosen: How did you light the challenging smaller spaces?

Don McVey: Smaller spaces were mostly lit with a combination of natural light and the Techpro LED. Occasionally popping in a Dedo. I tried to keep all lighting motivated. The first thing I did in each space was to look at the practicals and see how to accentuate what was already there. Or I would light from one side to boost what was coming through windows. I avoided lighting from the front, favouring side and back lighting, for a more dramatic look. Idea was to keep the rooms clean and bright while accentuating the people within the space.

Joe Rosen: What surprised you most about the kit?

Don McVey: It was my first time using a Cineo HS, and I was blown away by what it did. It’s now a firm part of my go to lighting kit.

Joe Rosen: Do you have any other comments on the kit or process from the perspective of the DoP?

Don McVey: Many of the locations were not exactly what you’d call pretty. Old buildings, ugly practical lights or just plain uninspiring spaces. We really tried to embrace every space we entered (sometimes a nudge by the director was needed), with the attitude of getting the absolute best out of each setup. Every location provided unique challenges to overcome. Sometimes this meant compromising on the original idea to ensure that we captured the required story elements and got what we needed for the edit.

I’ll park this blog here, I could go on and write another thousand words or so about the approach to the edit, the GFX  and the Prores 4444 round trip in Adobe CC as well as the music, voice over, and grade but some people might think that’s a bit much.

I’d be happy to answer any question as would Don.

All that leaves is to thank to everyone involved, I think the finished film has turned out really well.